Smart Monitoring of Trees and Shrubs

Main problem: Under- or overwatering

Experience shows that freshly planted trees do not always thrive or even die off unless there is regular on-site inspection. This problem is associated with high cost and is very often due to the under- or over-irrigation of the tree. Since it can rarely be proven whether too much or too little watering is the problem, an objective assessment of the cause by the customer and by the supplier is practically impossible. Frequently, the supplier or landscape gardener must bear the costs in order not to lose customers.

If a public network for Internet of Things (IoT) applications is available, like in Switzerland, The Netherlands, and South Korea, sensors  which are equipped with a corresponding radio system can be placed in virtually at any location. It sends the measurement data directly to the Internet. From there, the data can be downloaded and viewed on the Smartphone or PC. In addition, thresholds can be set. When a threshold is reached, an email is sent to the user who then can start an irrigation.

If no public network is available - as e.g. the object to be monitored has been planted abroad - then it is still possible to set up remote monitoring. It requires a gateway that can be installed in the vicinity of the tree. This gateway must be connected to a router - which today is present in virtually all inhabited buildings - with a power  and LAN cable. In this case, the data is transmitted to a private server from which the data can be downloaded. On the Smartphone, tablet or PC, the measurement data can be viewed, evaluated and, if necessary, measures taken anywhere and at any time. If a threshold value of the soil moisture is set, then several responsible persons can be alerted automatically by email.

On the smartphone, tablet or PC, the measurement data can be viewed, evaluated and, if necessary, measures taken anywhere and at any time. If a limit value of the soil moisture is given, then several responsible persons can be alerted automatically by email.

Monitoring trees in public spaces, such as parks, etc., requires additional measures, as the electronics must be protected against vandalism and theft. In such applications, the electronics must be buried in the ground. However, this leads to the problem that the radio transmission is greatly impaired, since a large part of the spark energy is absorbed by the surrounding soil. The problem can be solved by using special antennas, which radiate primarily upwards. In addition, the battery life should be as long as possible, since the battery change is naturally more difficult in buried systems.

PlantCare has developed a special design for such cases, which optimally meets these requirements.

A plastic box (170x140x100mm) with an IP67 rating typically used in electrical applications houses the sensor electronics, antenna and battery holder. The battery holder can hold 2 type D batteries for a battery life of 6-8 years. The actual soil moisture sensor is connected to the measuring and radio electronics with a cable, whereby the cable length can be up to 250m.

The PlantCare Mini-Logger is a fully autonomous soil moisture and soil temperature sensor that collects and stores up to 12,000 records with date and time at adjustable time intervals. It is available in different lengths so that the measured data can be recorded even at different depths.

The mini-logger can be easily configured to the specific needs of the user by means of a configuration file. Two AA mono cells are enough to power the device for up to one year depending on the set measuring cycle (10min -10h) and the number of downloads. The data is permanently stored and retained even when the batteries are empty and need to be replaced. The mini-logger is waterproof and frost-proof.

Downloading the data is very easy and can be done on site without removing the sensor. Each data file is provided with the name of the sensor and unmistakable. Once all sensors have been read out, the data can simply be loaded into a computer and immediately graphed and evaluated using the PlantCare DataViewer software.

Virtually all of these projects require the MiniLoggers to be buried, as the area to be monitored is used for agriculture or the loggers are bitten by wildlife such as foxes and martens.

For this application, PlantCare offers a special version. The MiniLogger is housed in a plastic bottle (72x72x139mm). After removing the lid one get access to the USB plug. Necessary battery changes can simply be performed by pulling  the logger out of the bottle and make the change, without having to clean dirty parts first.

To ease the detection of the buried MiniLogger, one can put a metal object in the bottle. So one can find the position again with the help of a metal detector.

Expensive solitary shrubs should be monitored after transplanting for a period of time with respect to soil moisture. Signs of a disease, such as brown needle are usually associated with too low a water supply and are not attributed to excessive soil moisture. Also, incorrect settings of an irrigation system can be quickly detected and corrected.

Since the measurement data are documented, in case of damage the responsibilities can be clearly assigned. The damage caused by the loss of such a tree is disproportionate to the cost of the surveillance. 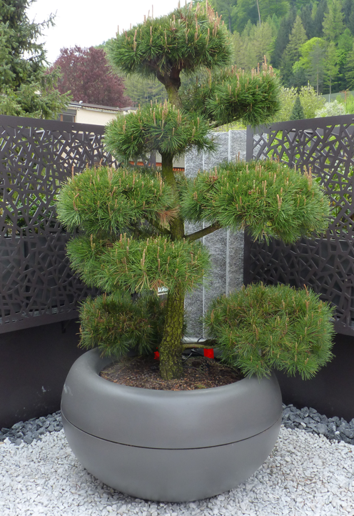